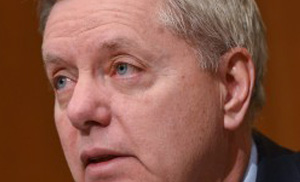 Someone managed to put together enough words to write a column for the Huffington Post accusing Lindsay (point: that is a girl name, so how can he be sexist?) Graham of making a sexist remark about Nancy Pelosi. When there is so much to say about her, going sexist would be unnecessary, but this astute reporter concluded the comment was sexist. See what you think (and I should add, this is second-hand info): “Did you see Nancy Pelosi on the floor? Complete disgust. If you can get through all the surgeries, there’s disgust.” It was clear, from the pictures of her during Netanyahu’s speech, that she was in a state of distress. Frankly, I was impressed given the Botox and facial reconstruction, she was able to achieve some of her expressions. That was one hell of a surgeon…but I digress… I actually found her comments about having been moved nearly to tears beyond absurd but the Left is lapping those up like a kitten drinks warm milk. Taken together with her actions during the speech of our only real “friend” in the middle East, she is a national embarrassment and for me, that’s the real story if you want to make any of this a story at all.

Lindsay (and that’s a girl name) Graham’s remarks pale in comparison to Nancy’s behavior toward Israel’s president. She should have simply opted out like so many of her Dumbocrat cohorts did instead of publicly embarrassing herself and this country by acting like a two-year old in a geezer’s body. It isn’t like this is the first thing she’s done that she should be ashamed of and it won’t be the last, and to try to deflect it by insinuating Graham is sexist is just silly. People (and by that I mean me) mock John “Stoneface” Kerry all the time…who knows what he even really looks like under his plastic surgery and Botox with his lizard-like tongue darting out as he speaks. Call me sexist, but if Pelosi has one more procedure she is not going to be able to close her eyes and as a warning to all the elders considering that degree of facial reconstruction, looking like you are perpetually startled because they’ve yanked your upper eyelids to your forehead does not make you look a day younger. It makes you look ridiculous. Her appearance is a distraction, but what is concerning about her is her behavior and hell-bent toward socialism philosophy. While I don’t think Graham’s remarks amount to sexism, I wish he had instead discussed the shameful way in which she comported herself.